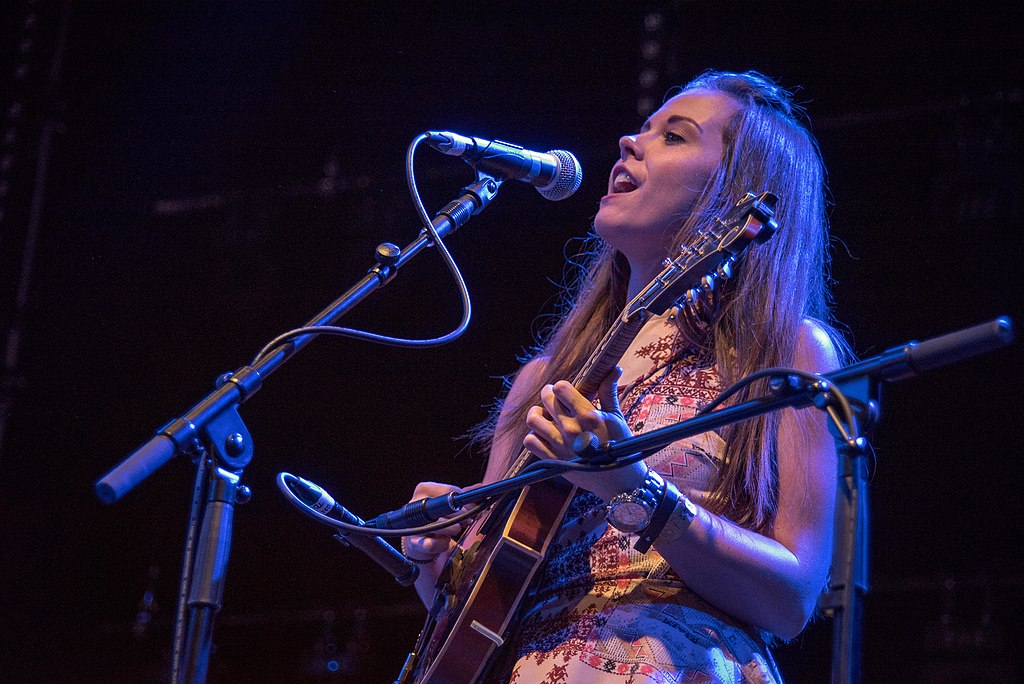 In her first 25 years alone, singer/songwriter/multi-instrumentalist Sierra Hull hit more milestones than many musicians accomplish in a lifetime. After making her Grand Ole Opry debut at the age of 10, the Tennessee-bred virtuoso mandolinist played Carnegie Hall at age 12, then landed a deal with Rounder Records just a year later. Now 28-years-old, Hull is set to deliver her fourth full- length for Rounder: an elegantly inventive and endlessly captivating album called 25 Trips.

Revealing her profound warmth as a storyteller, 25 Trips finds Hull shedding light on the beauty and chaos and sometimes sorrow of growing up and getting older. To that end, the album’s title nods to a particularly momentous year of her life, including her marriage to fellow bluegrass musician Justin Moses and the release of her widely acclaimed album Weighted Mind—a Béla Fleck- produced effort nominated for Best Folk Album at the 2017 Grammy Awards.

“There’s a lot of push-and-pull on this record, where in some moments I feel like everything’s happening so fast and I wish I could slow it all down so I can really enjoy it,” Hull points out. “But then there are also times where I’m looking forward to the day when the craziness has died down a bit, and life’s a little calmer.”

Made with producer/engineer Shani Gandhi (Kelsea Ballerini, Dierks Bentley, Sarah Jarosz, Alison Krauss), 25 Trips continues the musical journey begun on Weighted Mind, a body of work that built off Hull’s bluegrass roots and ventured into entirely new terrain. But while its predecessor assumed a sparse and stripped-back palette, 25 Trips embodies a far more intricately arranged sound—an effect achieved with the help of peers like guitarist Mike Seal, bassist Ethan Jodziewicz, violinist Alex Hargreaves, and fiddler Christian Sedelmyer, as well as several musicians that Hull has long admired (including bassist Viktor Krauss, guitarist Bryan Sutton, and multi-instrumentalist Stuart Duncan). Along with integrating electric instrumentation and percussion into her material for the first time, Hull dreamed up the album’s eclectic textures by embracing a free-flowing process that often gave way to lightning-in-a-bottle improvisation.

“There were some songs that we created from the ground up, where I’d go in and play by myself, and from there we’d bring in other musicians to add more and more layers,” Hull says. “It was really wonderful to work that way, where we started from a place of mystery and then just let the song show us what it wanted or needed to become.”

Immediately proving the power of that approach, 25 Trips lures the listener into its unpredictable sonic world on the beguiling opening track “Beautifully Out of Place.” With its shifting tempos and gently tempestuous mood, the song was sparked from words of encouragement spoken by Hull’s husband at a time of self-doubt and confusion. “I remember Justin saying to me, ‘I believe in you, so you’re just going to have to learn to believe in yourself,’” she recalls. “That inspired the first line for me, and the song just wrote itself from there.”

Although much of the album bears a rich complexity, 25 Trips also includes moments of stark simplicity that perfectly showcase Hull’s stunning vocal range. On “Everybody’s Talking,” for instance, her luminous vocals quietly capture the frustration of finding clarity in the midst of constant chatter from the outside world. And on “Ceiling to the Floor”—co-written with Kai Welch, a songwriter/musician known for his work with Glen Campbell and Abigail Washburn—Hull spins a tender metaphor from her longtime fear of heights. “I was telling Kai about how when I was little my dad used to try to get me over that fear by holding me up to the ceiling and saying, ‘Just touch it—I’m not gonna let you fall,’” she explains. Featuring a performance from legendary steel-guitar player Paul Franklin, “Ceiling to the Floor” drifts from memory to real-time reflection, slowly unfolding as a nuanced meditation on courage and love.

One of the most unexpected turns on 25 Trips, “Escape” emerges as a delicate collage of hypnotic percussion, otherworldly electric-mandolin tones, and poetic yet plainspoken lyrics (e.g., “I want to escape to a world that’s not closing in”). “I didn’t even have that song on my list for the album, but I played Shani a voice memo and right away she said, ‘I wanna record that,’” remembers Hull, who penned “Escape” with singer/songwriter Angel Snow. “I was a little hesitant since it’s so unlike anything else I’ve done, but in the end it was really exciting to play electric and come up with something in a completely different vein.”

In closing out 25 Trips, Hull shares an especially poignant track titled “Father Time.” “I wrote that song with Mindy Smith after spending a week with my husband and his grandma, after his grandpa had a stroke on Christmas morning,” she says. “His grandma had suffered with Alzheimer’s for years and couldn’t really stay by herself, and through that experience I decided to write about watching my husband take such good care of her, and how that made me love him even more.” With its heavy-hearted melody and choir-like harmonies, “Father Time” shows Hull’s effortless finesse in embedding her music with so many subtle details (including an instrumental reference to “Jingle Bells” tucked into the second verse). “We had our instruments with us at Christmas, so at some point we played ‘Jingle Bells’ for my husband’s grandma,” says Hull. “She can’t remember my name or Justin’s name now, but for some reason ‘Jingle Bells’ stuck, and she still asks for it year- round—it’s the most amazing thing.”

Even as its songs continually shift in genre, encompassing everything from bluegrass to folk-pop to ethereal alt-rock, 25 Trips remains rooted in the sophisticated musicianship that Hull has cultivated almost her entire life. Hailing from the tiny Tennessee hamlet of Byrdstown, she learned to sing from her mother as toddler, took up mandolin just a few years later, and began joining in local bluegrass jams by the young age of eight. With her childhood triumphs including joining her hero and mentor Alison Krauss onstage at the Grand Ole Opry at age 11, she made her Rounder debut with the 2008 album Secrets and promptly garnered the first of many nominations for Mandolin Player of the Year at the International Bluegrass Music Association Awards. In 2016, after a near- decade of consecutive nominations, Hull became the first-ever woman to win the award—then claimed that prize again at the 2017 and 2018 IBMAs. Over the years, Hull has also maintained a rigorous touring schedule, and has made occasional guest appearances with such icons as the Indigo Girls, Garth Brooks, and Gillian Welch.

Marking a bold new era in Hull’s artistic evolution, 25 Trips wholly channels the pure and palpable joy she discovered in the album’s creation—and ultimately illuminates certain truths about the indelible connection between risk-taking and reward. “One of the things I most enjoyed about making this record was getting to show the wide variety of music I love,” says Hull. “I don’t really know what category the album falls in, but I also think that matters less and less. What really matters to me is trusting myself to be who I am, and just putting my voice and my heart out there in the most sincere way that I possibly can.”