How to Buy an Acoustic Guitar Amplifier

Back in the 1960s, playing an acoustic guitar with a rock band or in a loud and boisterous cafe was often an exercise in frustration and aggravation. A soundperson would typically position a mic in front of your acoustic, and you were left to fight it out with all of the environmental and band noises swirling around you. It wasn’t ideal.

For a peek at what it was like back then, check out the YouTube video of The Band performing “The Weight” at Woodstock in 1969. Guitarist Robbie Robertson is playing his Martin D-28 in front of what looks like a Shure SM58 microphone, and amidst the clatter of his band mates, he may as well have been playing air guitar. You heard almost nothing from that Martin.

If only Robertson had access to an acoustic amplifier to power his pickin’ and strumming above the din of the band.

Acoustic Amps Save the Day

Electronic pickups for acoustic guitars go back as far as the 1930s—most notably with the Gibson ES-150 acoustic archtop, which bore a bar pickup, and was so popularized by jazz guitarist Charlie Christian (1916-1942) that the pickup was ultimately named after him. But acoustic amplifiers that truly captured the beautiful timbres and dynamics of acoustic guitars took quite a while to appear. In the interim, acoustic guitarists armed with pickup-equipped instruments often plugged into electric-guitar amps with less-than-stellar results. The sound was often too bright, too edgy, and completely one dimensional—even when an acoustic was plugged into what would be considered a “clean” guitar amp.

Happily, the acoustic-instrument explosion forged by MTV Unplugged in 1989, as well as the emergence of tech-savvy, mobile buskers, drove innovations in acoustic amplification. Today’s acoustic amps offer myriad features and excellent tones that make playing an acoustic guitar at band gigs, jam sessions, and cacophonous outdoor environments pure joy. In fact, Robbie Robertson probably wishes he could time travel through a rip in the multiverse and cart an acoustic amp onstage for that Woodstock gig.

If you’re tired of getting pushed around by errant soundwaves and overly loud band members, a dedicated acoustic-instrument amp is at the ready to help you get heard. To zero-in on the best amp for your needs, establishing exactly what those needs might be is an excellent start.

I’m gigging with a band. Power and sound distribution are key if your acoustic instrument is competing with drums, keyboards, and electric guitars and basses. The amp should have enough wattage to ensure you are heard—100 watts should do the trick with headroom to spare in most cases, while some behemoths can go up to 200+ watts—and a two- or three-way speaker system (woofer and tweeter, or woofer, midrange, and tweeter) can spread out the sound spectrum sufficiently to cover a wide range of the stage and venue. 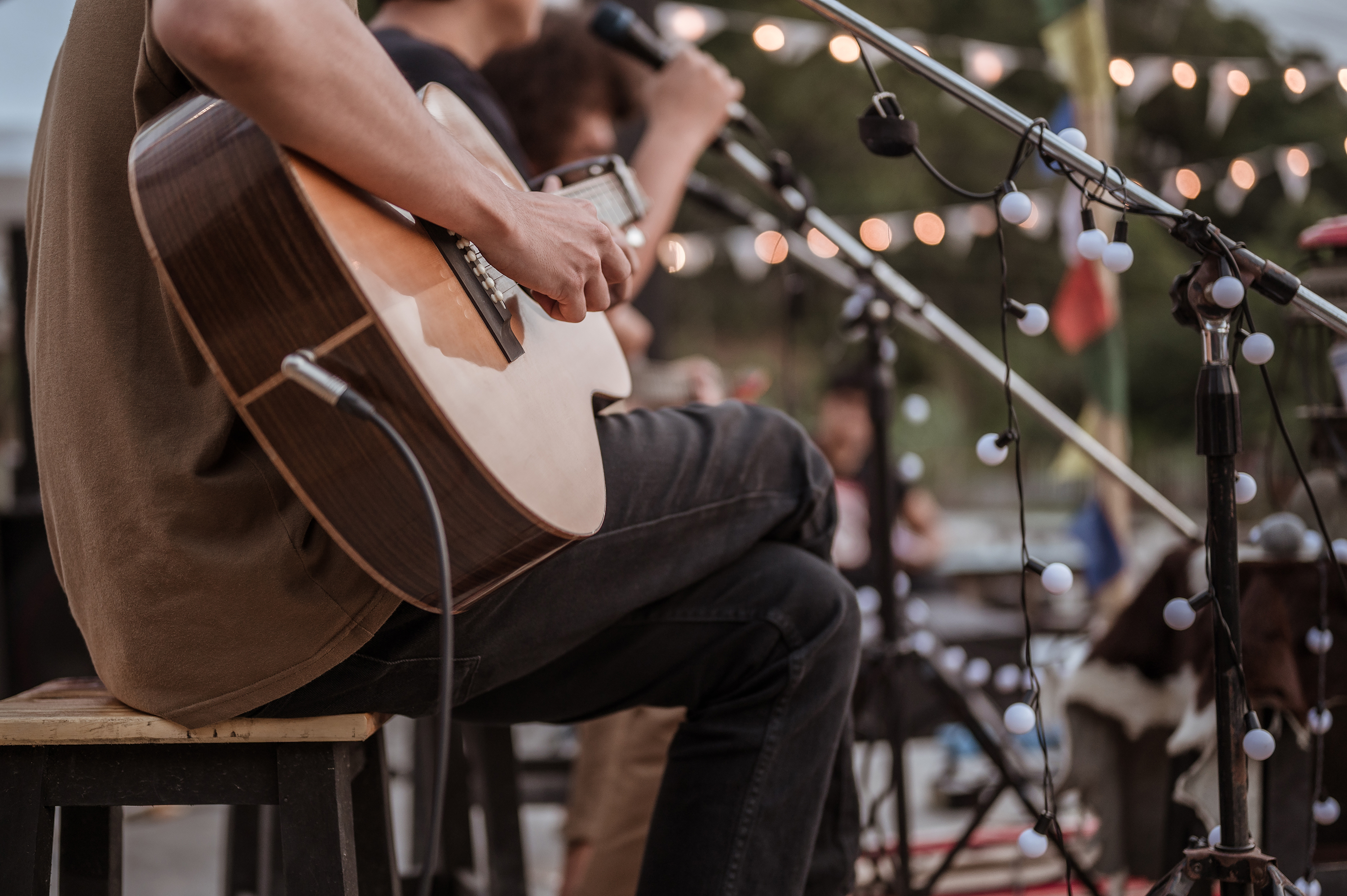 I’m playing cafes and coffee houses as a solo act or duo, and I’m also busking outdoors. Without having to bust through the roar of an electric band, you can probably reduce your wattage requirement to between 50 watts or 60 watts. You’ll still need enough power to be audible in noisy food and coffee joints, as well as have enough juice to be heard outdoors. Busking gigs also add two other elements to consider—portability and power. Unless you have a willing entourage of helpers, you aren’t going to enjoy moving a heavy amp around parks, transit stations, city streets, and other locales. A relatively lightweight and easy-to-carry amp will do wonders for your mood (and muscles), and it should also allow quick setups and breakdowns. Obviously, most busking spots don’t provide access to power—you can’t plug into a maple tree in the park—so a battery-powered amp is pretty much a “must have.” 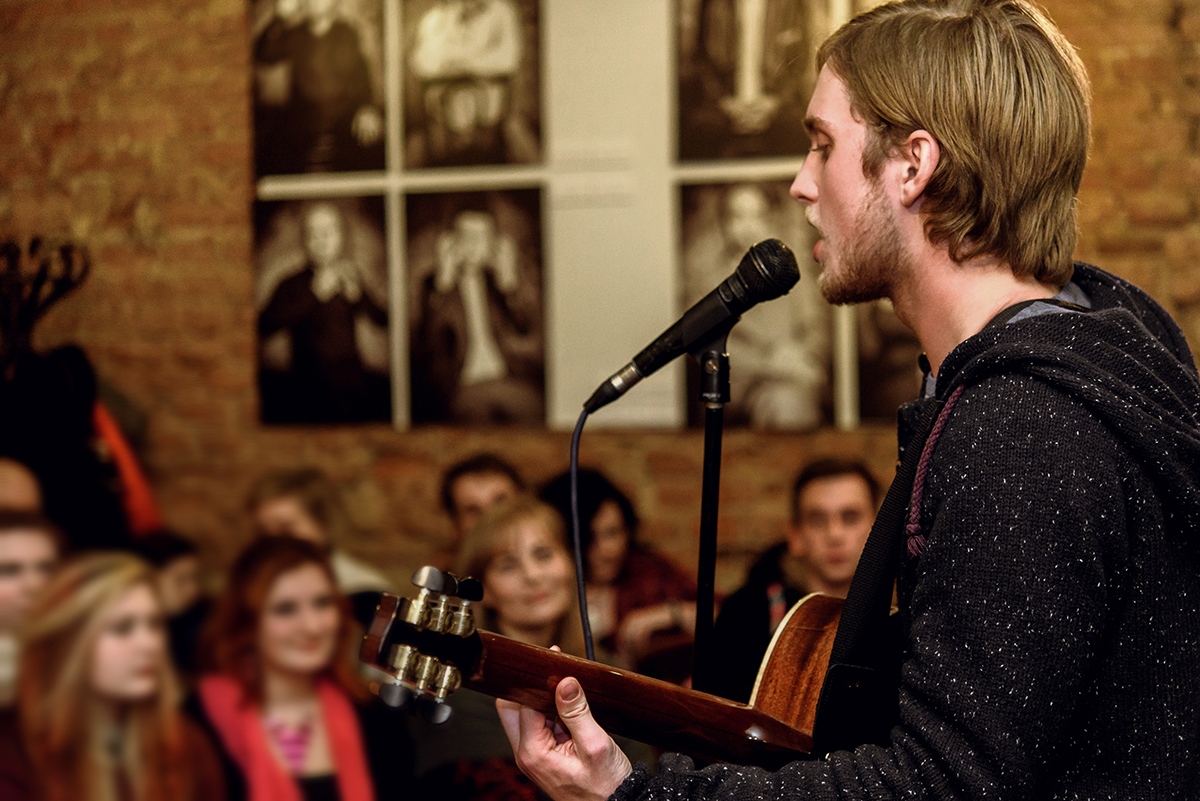 I’m practicing at home and doing an occasional house concert for around ten people. For solo rehearsals and small gatherings, an amp delivering 20 watts to 30 watts should be just fine. Unless you’re performing aggressive metalcore songs on an acoustic guitar, you shouldn’t need a whole lot of amplified volume. Power is usually readily available if the majority of your playing takes place indoors, but an option for battery power certainly expands the number of places you can practice or perform.

In all cases, the goal is to find an acoustic amp that delivers a relatively flat, uncolored frequency response that maintains the organic sound of your acoustic instrument. 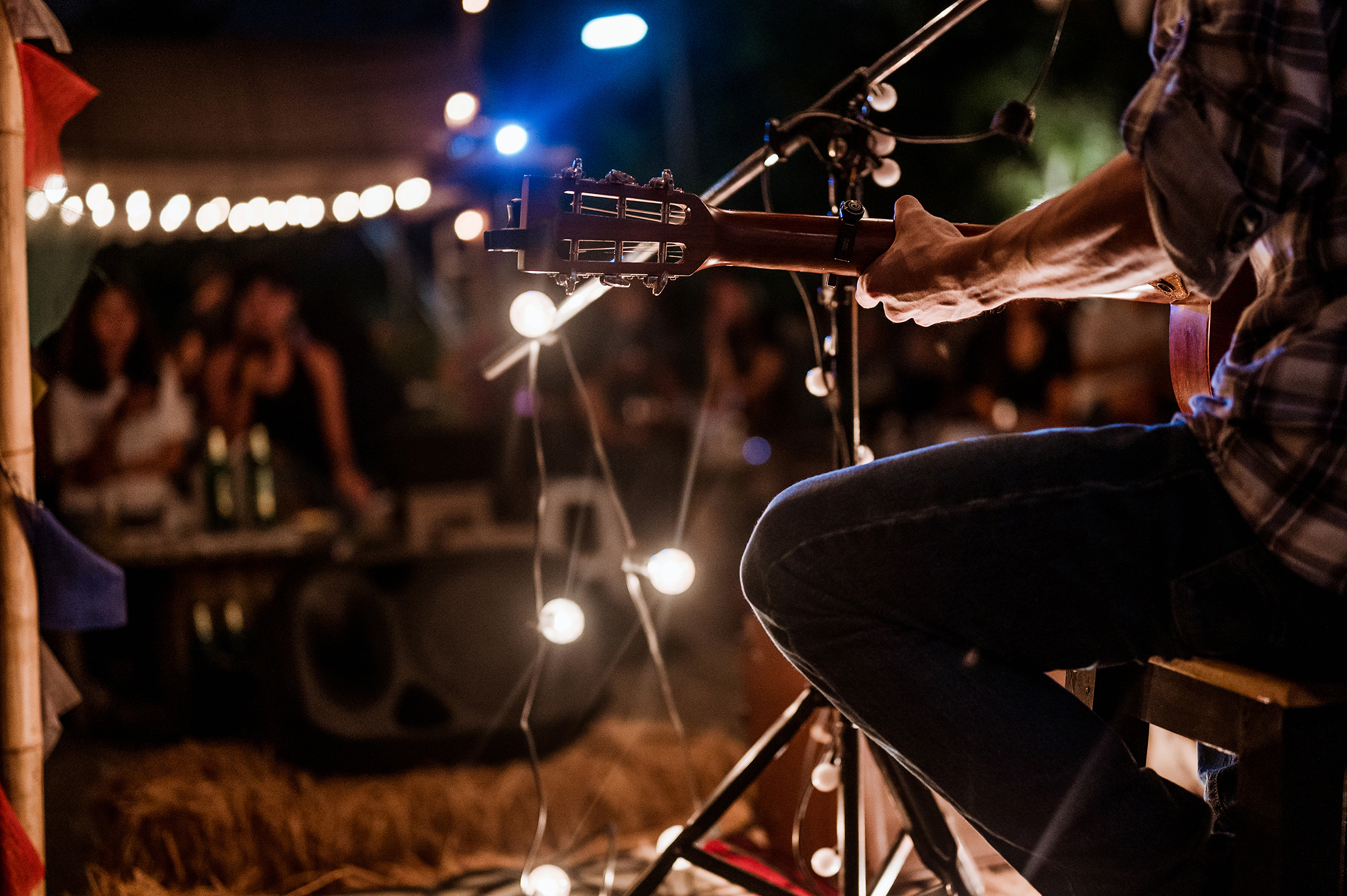 What Features Do I Want?

Finding the right acoustic amp isn’t just about evaluating volume levels. There are other sonic controls and applications that make for a smooth playing experience.

One or two channels? Try to envision your future needs, as well as your present ones. For example, you may be performing as a solo instrumentalist at the moment, which makes a one-channel amp ideal. However, if you think you may want to add vocals to the show, you’ll need two channels—one for your instrument and one for a vocal mic. Two channels is also essential if you plan to bring on a collaborator at some point—another guitarist, vocalist, ukulele player, and so on—as your musical partner will certainly appreciate having their own channel from which to adjust level, EQ, effects, and other signal processing. Share the wealth!

Versatile inputs. Don’t get caught short here, as being able to plug in everything you need to perform is key. At the very least, you’ll want a 1/4″ jack for the cable from your instrument and an XLR jack for your microphone. You may want more. For example, a headphone output is critical when you want to practice or tweak tones without disturbing anyone. The acoustic sound of your instrument will still be audible, of course, but any added amplification and processing will be kept between you and your headphones. Furthermore, if you want to enhance your performance with pre-recorded tracks or other audio, you’ll need Bluetooth connectivity and/or a 1/8″ or 1/4″ aux input to play sounds from your mobile device (or other playback system). 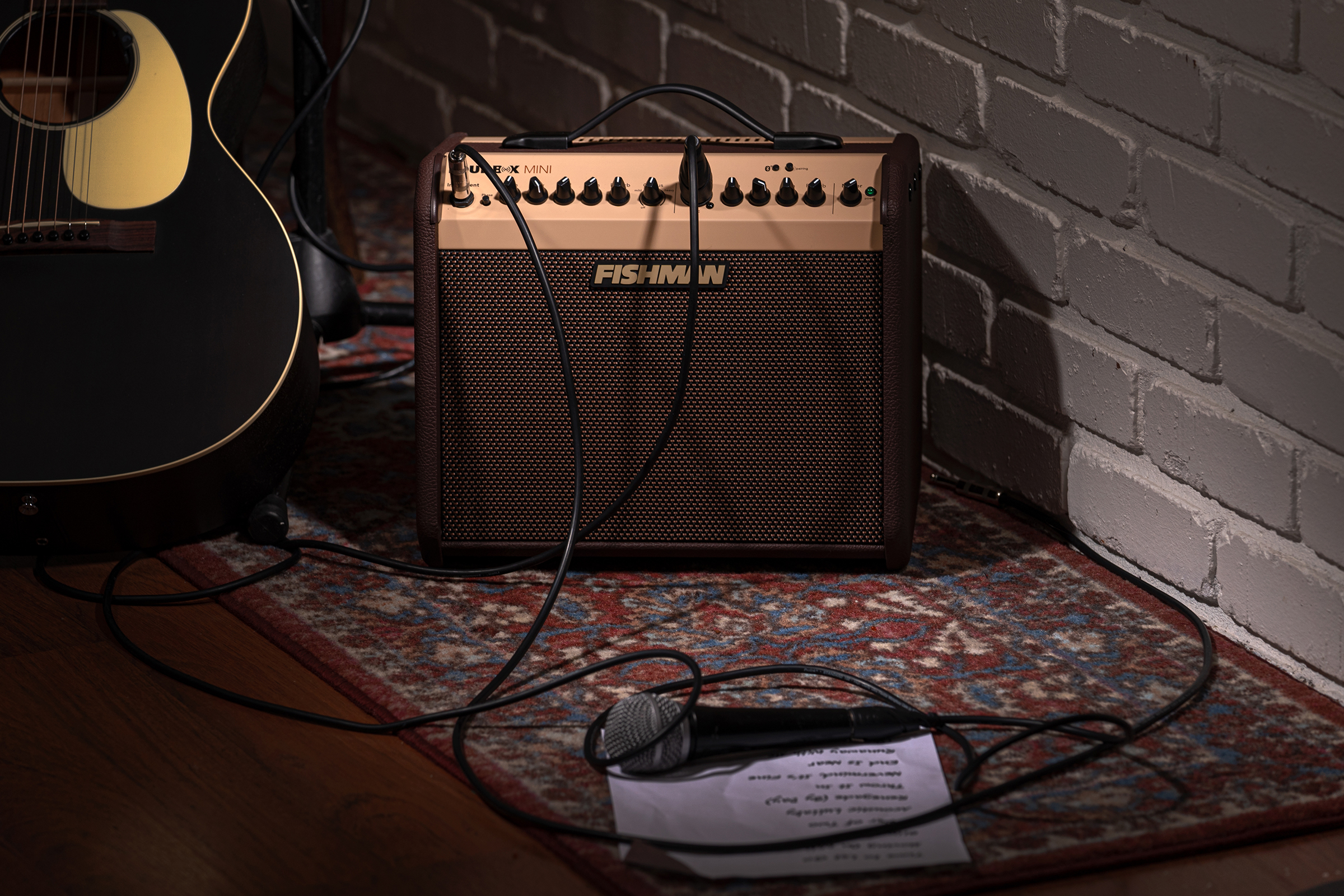 Anti-feedback control. Most instruments outfitted with an electronic pickup can generate feedback. At times, the caterwauling shrieks and hums can be considered musical ornamentation. (Jimi Hendrix anyone?) But you probably don’t want feedback gremlins defiling your sensitive, heartfelt ballad about rescuing puppies. An amp’s onboard EQ can sometimes be deployed to seek out and reduce any offending frequencies that are causing your acoustic guitar to resonate and hum, but a dedicated feedback control is even better. A single push of a button or a couple of knob twists can suppress feedback almost instantly. This is one of those controls you’ll probably never need to touch, but when you do need it, it can be a gig saver.

Effects. Many electric guitarists tend to be all about stompboxes and signal processors that can transform the organic sound of their instrument into something dangerous or disturbing or hauntingly beautiful. Acoustic guitarists shouldn’t be excluded from such creative shenanigans, so if you want to dive into effects processing, make sure your amp of choice at least offers onboard reverb and delay. Some acoustic amps up the ante with multi-effects processing that includes chorus, vibrato, tremolo, flanging, compression, etc.

Other goodies. If your music has a fair amount of atmospheric and mood changes, it can help to have footswitch control of features such as effects on/off, as well as channel mute for silently changing out, say, a mandolin for an uke. A direct or D.I. output lets you dial in your stage sound, and simultaneously send your amp’s output to a mixer or P.A. system. This is a great option if you’re playing a large venue or outdoor festival where your amp doesn’t have a prayer of reaching the “back rows.” In these situations, simply let the soundperson connect an XLR cable into your D.I. output, and the venue’s sound system will do all of the heavy lifting for you. Some amps offer a kickstand that lets you tilt the amp and point its sound output towards your head (for more efficient monitoring of what you’re playing) or more precisely aim the signal at an audience that may be sitting higher than your performance spot.

Fishman has been at the forefront of acoustic-amplification technology and innovation since founder Larry Fishman started making acoustic pickups in 1981. More than 40 years of experience in the acoustic space has given us a uniquely comprehensive understanding of what unplugged players want when they choose to plug in. So, it’s hardly a surprise that the Fishman Loudbox series of acoustic amplifiers has a model that fits each scenario we’ve outlined in this article. 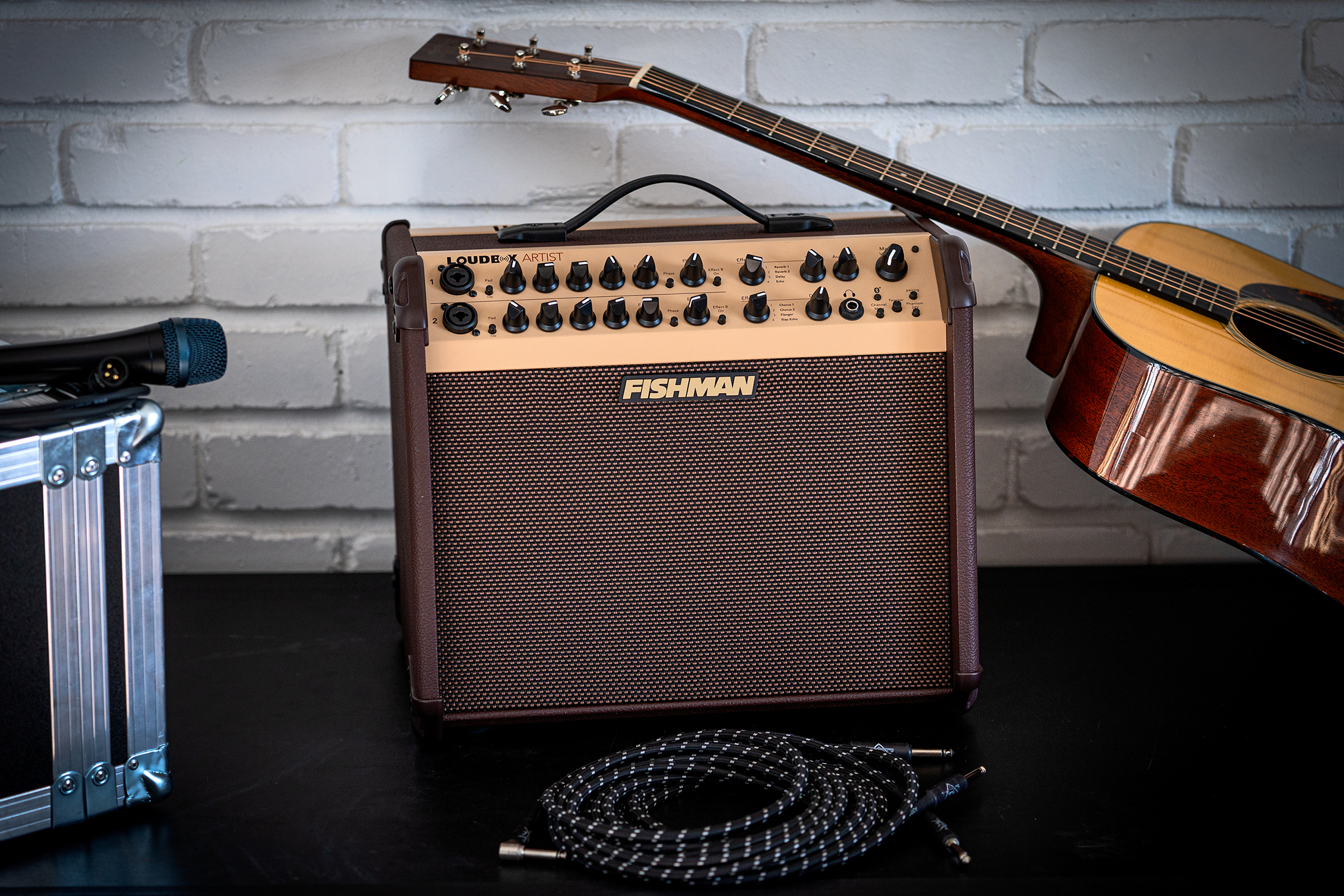 The Loudbox Mini is small, portable, and powerful. It’s an amp that grows along with your aspirations. You can start out practicing in your home, but when you want to bring your act to cafes and clubs, the Mini’s 60 watts of power won’t let you down. There’s an instrument channel and a mic channel if you want to play and sing as a solo act, or you hit the scene as a vocal/instrumental duo with a friend. The Mini includes Bluetooth and includes 1/8″ and 1/4″ auxiliary inputs for playing back content from audio devices. An onboard direct output can send your signal to a mixing console, which means you could conceivably use the Mini as a stage monitor and run it through a house sound system to play an arena. How flexible can you get? 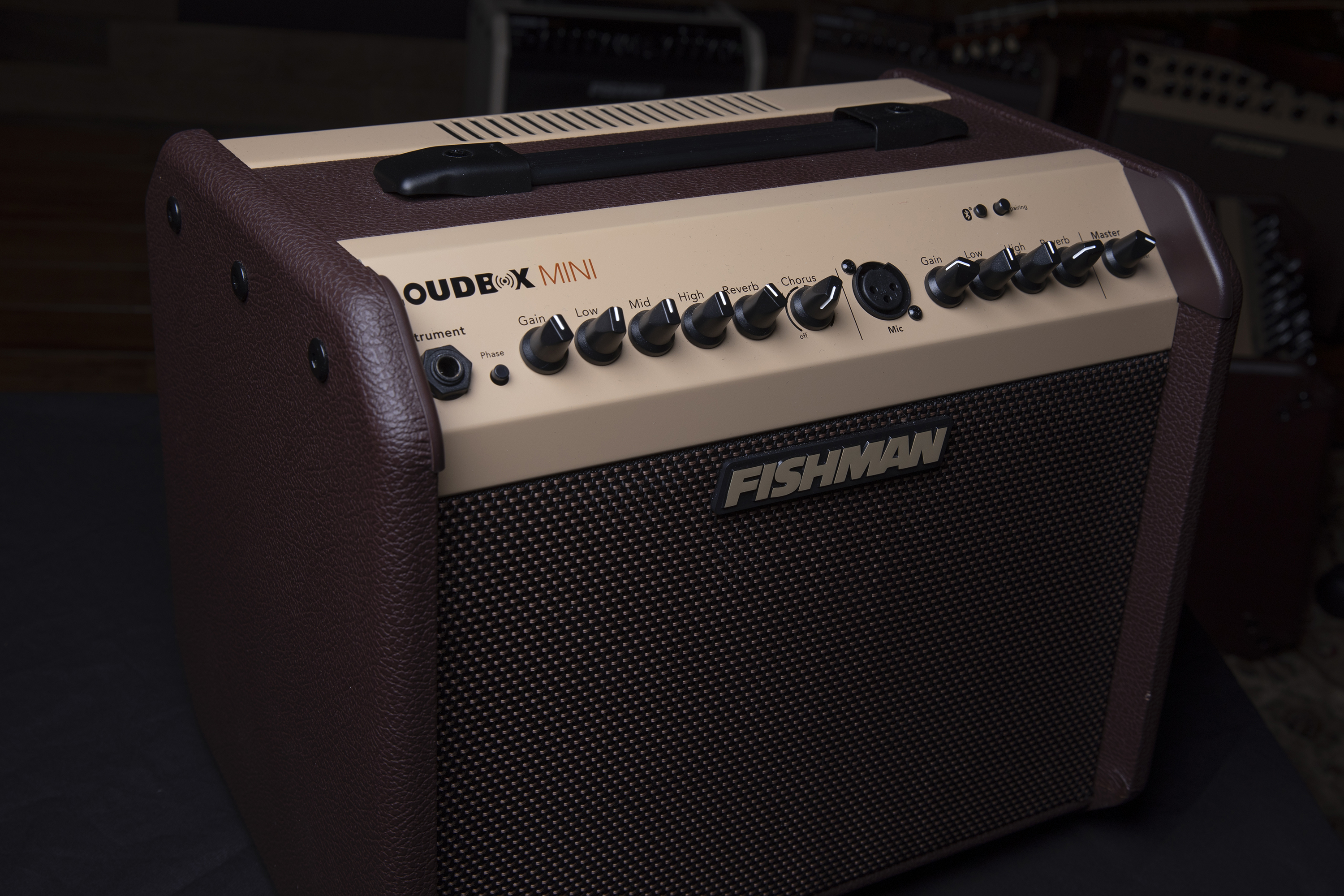 If you don’t want to be chained to a power source, the battery-powered Loudbox Mini Charge frees you to take your act out into the wild. The feature set is almost identical to the Loudbox Mini. The Charge adds a soft-dome tweeter, but loses the 1/4″ aux input (the 1/8″ aux input is alive and well), and its rechargeable battery powers the amp for 18 hours at low-volume levels, 12 hours at average volume, and four hours if you play as loud as Rammstein. 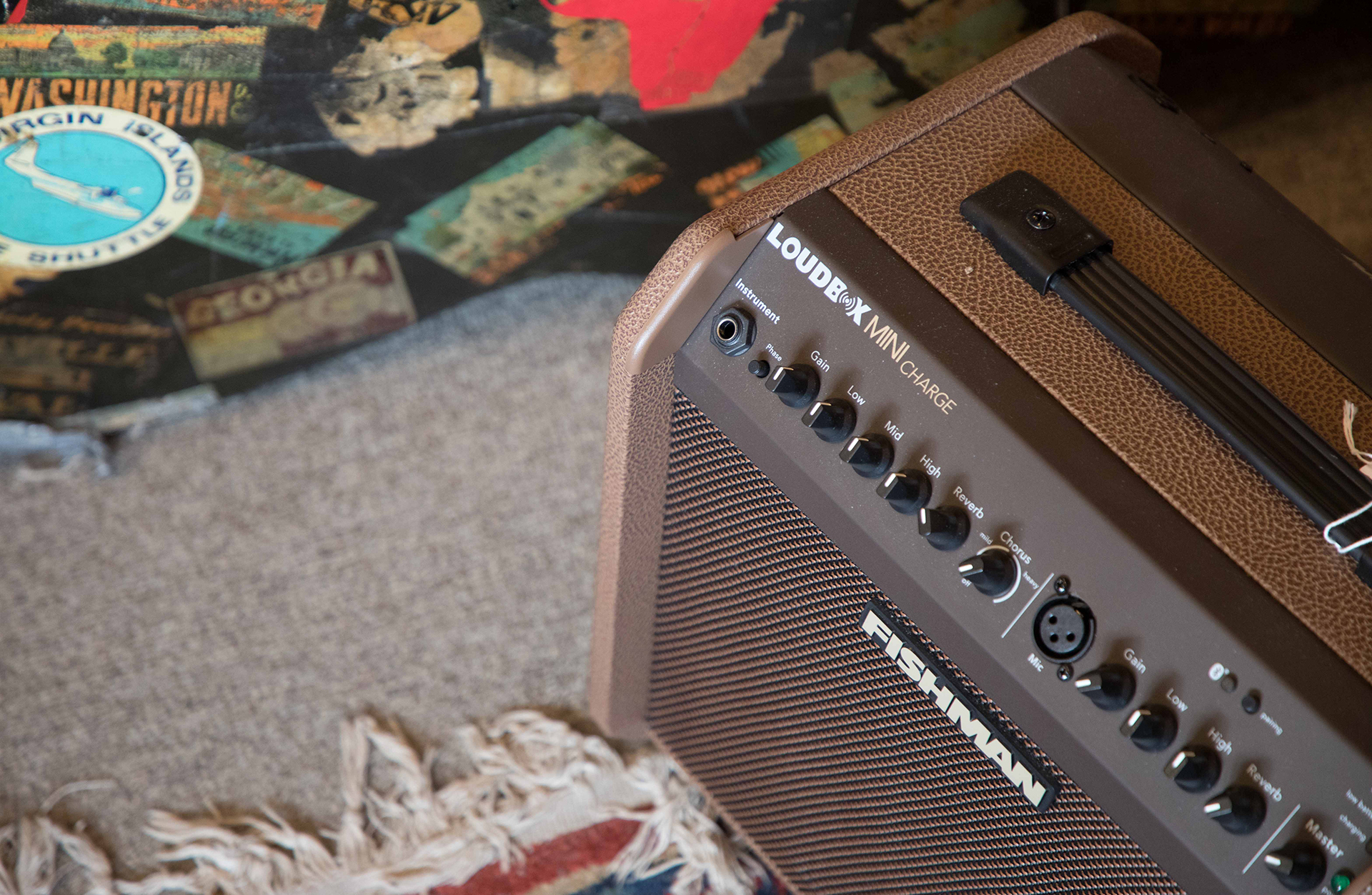 The 120-watt Loudbox Artist and 180-watt Loudbox Performer amps are no-compromise, fully professional options for acoustic performers who want to be heard when playing with drums and other electric and acoustic instruments. Both of these two-channel amps with combo instrument and mic inputs can see duty as small P.A. systems for solo performers, instrumental duos, or live musical performances enhanced with previously recorded backing tracks (thanks to a stereo aux input and Bluetooth connectivity). Microphone selection is expanded, as the Artist and Performer can work with dynamic mics—just like the Mini and Mini Charge—and each amp’s onboard 24-volt phantom-power switch also makes it possible to use condensers. 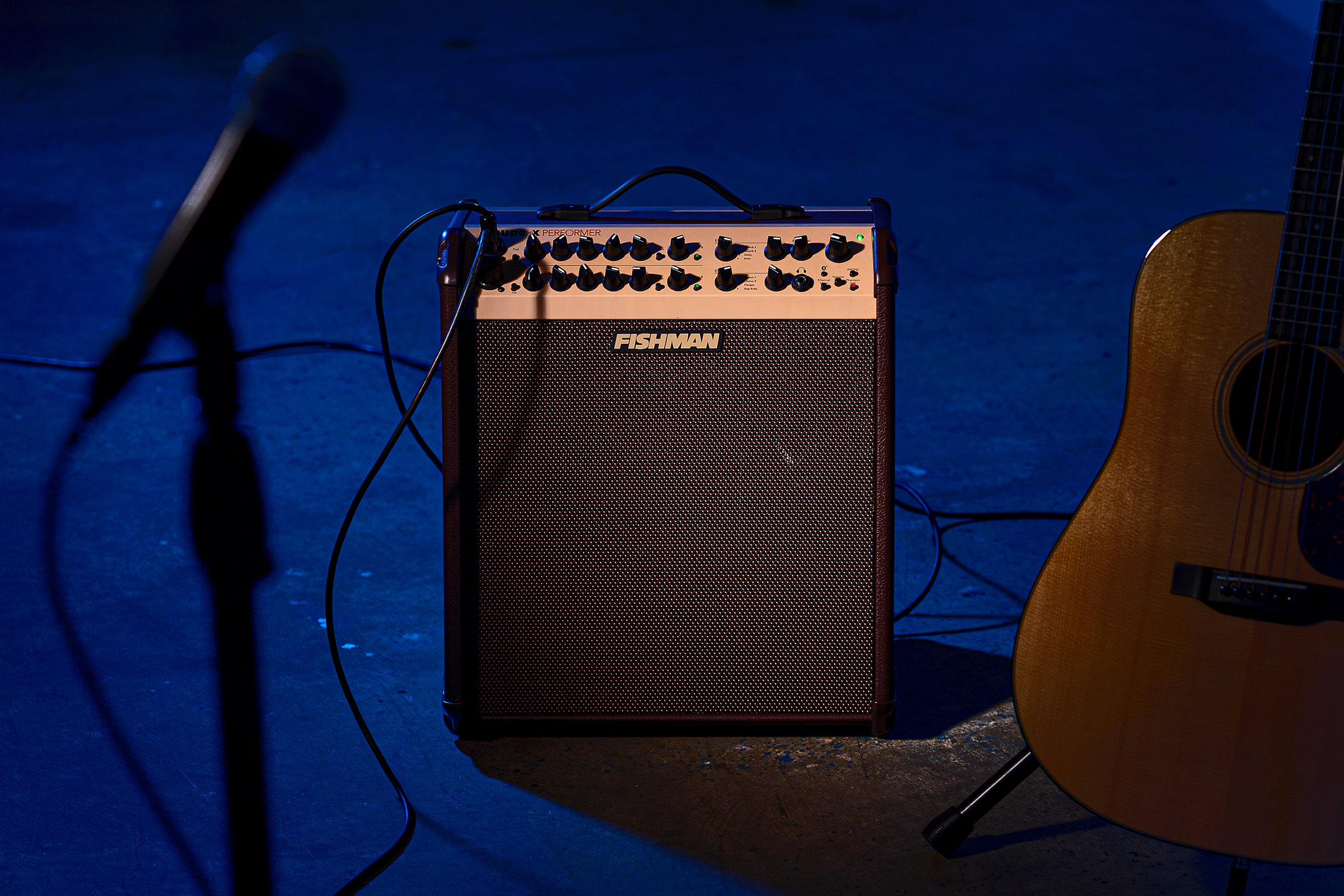 A number of manufacturers offer excellent acoustic amps, so a little research and (hopefully) a play session or two at a local music store should lead you to a model that’s perfect for you, your performance technique, and your style of music. The choice will be even easier if you define your needs and trust your ears. Now, go out there and be heard!