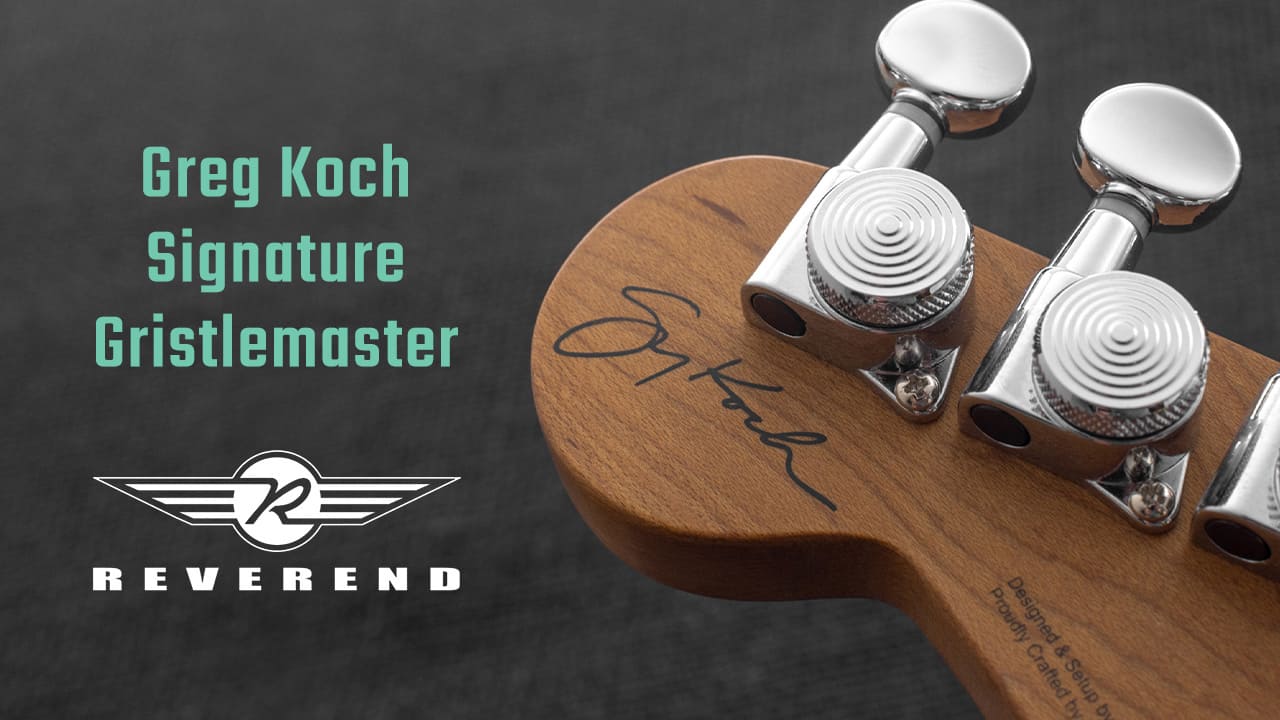 Posted at 13:06h in News by Ryan Fitzsimmons 0 Comments
Share

In his Guitar Player magazine review of the Greg Koch Gristlemaster, Art Thompson begins by echoing the thoughts of legions of Gristle-Bewitched guitarists around the globe, “It’s high time somebody made a signature guitar for the incomparable Greg Koch.” Indeed!

Over the years, Greg has established himself as a unique talent; author, performer, product clinician, and all-round legend. At Fishman, we quickly realized Greg’s artistry was also backed up by a keen understanding of sound and tone, and Greg’s Gristle-Tone set was the first Fluence signature model pickup set we offered.

Now, with the introduction of his signature guitar, Greg-fans can have it all in one cool instrument.

Art Thompson’s review covers all the bases, “The Gristlemaster features a korina body that’s a bit larger than a standard Tele’s and has a raised center section as well as a small chamber under the pickguard… and the roasted-maple neck attaches with six bolts and carries 22 frets and Reverend Pin-Lock tuners, so named because turning a thumbwheel on the back of the machine pushes a steel pin up though the post to lock the string in place. The headstock also sports the company’s own patent-pending Triple-Tree string tree, which has an extended bar that holds three strings down and prevents the G from buzzing in the nut slot. Here’s where you also find Koch’s signature, along with the handwritten serial number and the initials of the person who did the final setup.”

When it comes to the Gristlemaster pickups, Art adds, “However, the kicker for this guitar is its Fishman Greg Koch Signature Gristle-Tone pickups. Koch, who endorses Fishman’s Fluence series humbuckers and single-coils, has said of the Gristle-Tones, ‘I’m happier than a Sasquatch in heat during Sasquatch Week with my Fluence pickups. They’re the answer to my tonal dreams. They sound so good, it’s almost hard to believe.’

“Tested with a Fender reissue Deluxe Reverb (with Alessandro hand-wired circuitry), a Mesa/Boogie California Tweed 1×12 combo (reviewed in the April issue) and a Copperhead Audio 1950 1×12 combo, the Gristlemaster sounded deliciously twangy and gutsy, with balanced highs, great midrange presence and tight low-end. The neck pickup doesn’t take a back seat on this guitar either, as it’s clear and deep sounding and has power to spare for soloing. The bridge position is joyously ballsy when driving into a gained-up amp or pedal, and with both pickups on they blend in such a great way because they’re kind of equal punchers on the Gristlemaster’s soundstage. The boost sounded so cool that I kept on most of the time, although it is cool to be able to press a button and get a more traditional-style Tele response. Note too that the Fluence pickups are dead quiet, which is yet another benefit of Fluence technology.”

Here at Fishman, a big part of what we do is working with great artists and guitar-makers to help bring their sound-vision to reality. We couldn’t be happier for Greg, as he gets the recognition he has worked for and so deserves. We agree as Art sums it all up, “What a cool and impressive guitar! Hats off to Reverend for creating a welcome new take on a classic workhorse and, in doing so, celebrating one of the most extraordinary players around. All told, it’s an easy Editors’ Pick Award for the Gristlemaster.”